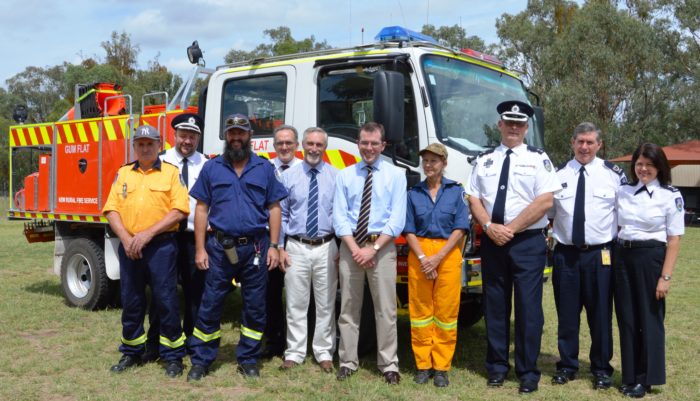 Member for Northern Tablelands Adam Marshall officially handed over the keys to members of the Gum Flat RFS Brigade.

MEMBER for Northern Tablelands Adam Marshall was in Inverell last weekend to hand over the keys of a new fire truck to the Glum Flat NSW Rural Fire Service (RFS) Brigade and present long service medals to RFS volunteers from Yetman, Ashford, Delungra and Gum Flat.

Mr Marshall said he was incredibly grateful for the dedication shown by the volunteers toward their communities.

“Testament to that dedication is the fact that among today’s 18 medal recipients, there is a combined tally of 413 years of service and nine of those volunteers have given more than 20 years of service to NSW RFS.

“Our communities rely heavily on their services and these long service medals are our way of saying, on behalf of everyone in the district, thank you.

“There aren’t too many organisations out there these days where you would still see that level of commitment and it is heartening to see the dedication of the members when you think of the difficult job they often face,” he said.

Mr Marshall said that while the core business of the members is fighting bush and grass fires, it was common knowledge that RFS members did much more than that.

“They help education the community about the risk of fire and how to protect against it and help train the next generation of firefighters; their skill, dedication and loyalty are indeed to be admired,” he said.

On handing over the keys to the new $180,000 Cat7 tanker to the Gum Flat Brigade Captain Ray White, Mr Marshall said he was delighted to see the government and local council appreciated their efforts by continuing to upgrade their equipment.

“I know the old Mitsubishi served you well but I’m sure you will all agree the New IZUZU is a quality upgrade and will prove to be a valuable asset,” he told brigade members.