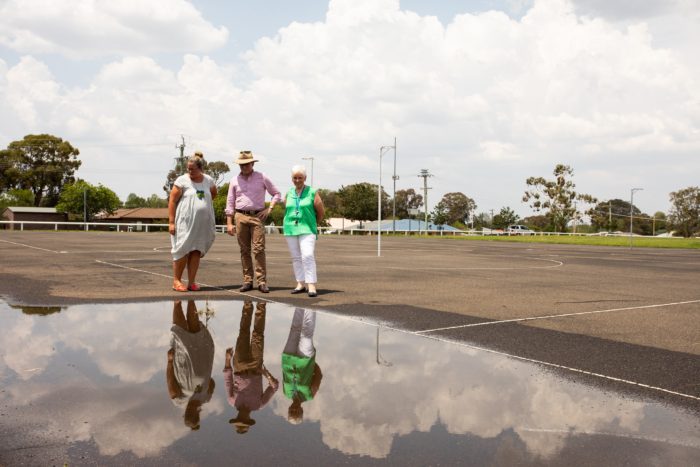 NORTHERN Tablelands MP Adam Marshall has thrown his full support behind a proposal to undertake a major redevelopment of the Armidale Netball Complex, today announcing he is working to secure a $600,000 grant from the State Government.

Mr Marshall said the majority of the courts on Lynches Road had served Armidale and District Netball Association well for 20 years, but now they posed a serious safety risk to local players.

“Netball is one of the most popular women’s sports in Armidale with around 1,000 participants taking the court either competitively or socially each week,” Mr Marshall said.

“Unfortunately time and high use have really taken a toll on this important facility with large cracks and crumbling bitumen making the playing surface slippery for players and umpires.

“A lack of run-off and drainage at the venue has also really sped up the decline of the courts, with water unable to get away after rain events and often pooling for days.

“Ultimately the majority of the 10 courts need some form of work, whether it’s to be fully pulled up and re-laid or renovated with new line marking and asphalt patching.”

Mr Marshall said he was working with the association to secure financial support for the three-quarter-of-a-million dollar project.

“There is a huge amount of work which needs to be done to get these courts up to any form of safe playing standard and it won’t be cheap,” Mr Marshall said.

“This facility is at a real tipping point, which if nothing is done to fix it soon could see some of the courts rendered unsafe and unusable.

“At a time when there is a real focus on driving participating in women’s sport I’m not willing to allow that to happen and will continue to push to secure funding to help ease the financial burden on Armidale Netball.

“The association has applied for $600,000 from the Government and am confident we should know by early March what the outcome of this grant application will be.”