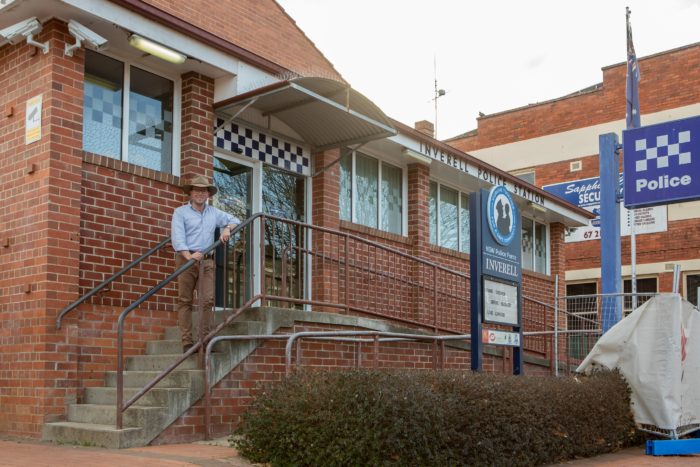 Northern Tablelands MP Adam Marshall outside the Inverell Police Station, which will soon be replaced by a new modern station.

NORTHERN Tablelands MP Adam Marshall has today announced the opening of tenders for the construction of the new and expanded $9 million 24-hour Inverell Police Station.

“Both Inverell’s hard-working Police and the community have been calling for this new station for many years and it’s exciting to see tenders called, which will pave the way for construction to start before Christmas,” Mr Marshall said.

“This project has required a lot of planning, with the demolition of the existing 60-year-old overcrowded and dilapidated station and construction of a modern, larger and better equipped building on the same site.

“Inverell is the only 24-hour police station in the region that hasn’t had a major upgrade or been replaced, following Armidale in 2007 and Moree in 2013, but that is about to change.

“When complete the new station will support a growing local police force, with modern facilities and the equipment they need to prevent and disrupt crime and keep the community safe for decades to come.

“It will be large enough to comfortably cater for the more than 50 local officers and the future growth of Inverell’s police ranks.

“The tender process will take place over the next couple of months and all going well, we should have a contractors appointed and work started in December this year.”

Mr Marshall said there would be minimal disruption to community policing in Inverell, while the new station takes shape over the next 12 months.

“A temporary Inverell Police Station will be established on Campbell Street in the former motor registry building,” he said.

“This building is currently being renovated ahead of the local Police moving across in November, where they will be based until the new station is completed.

“I thank Chief Inspector Rowan O’Brien and his Inverell officers for their patience while the planning process took shape and we all now look forward to marking the start of construction on the new station very soon.”